And it’s not always for the good. What do I mean?  I mean that, we as a society have been so overtaken by technology such as computers, tablets, video games and worst of all cellphones, which cause our natural head position, instead of resting naturally on top of our shoulders (the way nature has designed our bodies to perform at its best) it is always in a constant state of flexion.  This head flexion, if it was temporary would not be a problem, however from the chronic state of head flexion coupled with poor posture cause the soft tissues in the front of the neck to become stronger, pulling the spine out of its natural position, causing tendons and ligaments to become tighter. This abnormal development makes it almost more comfortable to be in a state of flexion (head forward position) and more difficult to maintain normal posture. 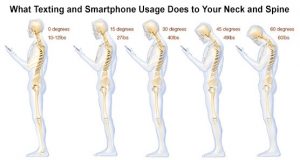 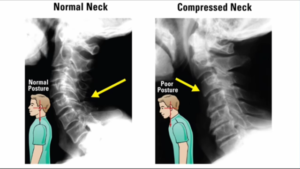 What’s the big deal in looking like a primate? Primates, if you were to do a dissection on their brain, would be the size of a fist because they are in a constant state of head flexion, causing there to be a lack of development in the cerebral cortex. Archaeologists proved that when man stood upright, there was a larger skull that allowed humans to have full expression of potential to reason ad our intellect became what it is. So this probably doesn’t mean anything to you but in life, life styles or life habits force people to maintain certain physical actions that alter the soft tissue. That means that if you were to lift up a dumbbell with only your right arm and not your left, your right arm would be much bigger. That’s because of Wolff’s law, any force against the body causes the body to develop itself to adapt to that weight and pressure. 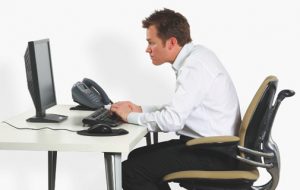 I think most people are so preoccupied with their devices, or with whatever they’re reading or writing, that they have no idea about their compounded effects and how it alters their spine’s alignment, balance and movement. As a chiropractor what I’ve observed over past 35 years, is that if a person who has had a small spinal misalignment (subluxation: which means it’s vertebrae is out of its normal juxtaposition causing a change in function and neurological communication between brain and body) could be corrected with a limited course of care. Today with all of the technology (hours upon hours of sitting in front of a computer incorrectly, looking down at cellphones and probably the worst, children playing much too much video games) that same minor misalignment takes three times more care to a. remove symptoms and b. make a structural change, especially if someone is not willing to change their life style that helped create the problem in the first place. The purpose of this blog is to bring a perspective to the reader that there are ways to help regain the body’s natural alignment, balance and communication. First thing is to identify the lifestyle that is creating the structural imbalance and see how you can improve what you are doing. For instance, if you are on a computer look at getting a stand up computer desk, avoid sitting for extended periods of time, but it’s more the head flexion that you want to avoid. While you are standing, your computer screen should be level with your head looking out straight with no flexion.  Second, limit cellphone use, mainly talk on speaker, it is the incessant head flexion looking down at text messages or reading something on your phone while you are sitting down that puts massive pressure on your spine causing a structural weakness and a spinal misalignment (subluxation). If you want to look at the damaging effects of constant head flexion you can refer to this article or this article.

Never in a time in history has humankind been so effected by all the devices that we use on a daily basis.  I believe that there is no accident that specific scientific chiropractic care is available for mankind at this time and important for the current generation, not because they have a symptom, but so that they can maintain their spinal alignment and health, as well as humankind’s continued evolution. Consistent periodic chiropractic check-ups and adjustments, when necessary, prevent the effects of unnatural physical stress.  In today’s world with technology it is a given that physical changes will occur and it is better to prevent problems from developing than to treat symptoms or conditions once they are manifested.